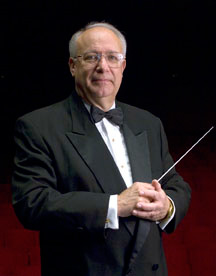 Professor Farnham received his B.M. in Music Education from the Northern Conservatory of Music and did graduate work at the Vandercook College of Music in Chicago. He studied conducting with Richard Castiglione formerly of the Boston Conservatory and Anthony Maiello, Director of Instrumental Studies at George Mason University.

Mr. Farnham appears throughout the United States and Canada as a clinician, adjudicator and conductor and has guest conducted at several national and international festivals including the Atlantic Band Festival in Halifax, Nova Scotia, the Music Educators National Conference Eastern Division Conference, The International Band Festival in Winnipeg, Manitoba, the Music in May Festival at Pacific University in Forest Grove, Oregon, and the Mid-West International Band and Orchestra Clinic in Chicago.

In the spring of 2009, he was guest conductor of the DoDDS / Europe Honor Band in Wiesbaden, Germany and conducted the University of Maine Symphonic Band at Symphony Hall in Boston.

For seven years prior to his doctoral study, he was a director of instrumental music in the Goddard, Kansas school district, teaching in all areas of the instrumental music program (band, orchestra, jazz band, marching band, and chamber music). Edelman’s research areas include lifelong music learning, undergraduate music education preparation, conductor decision-making, and the music student teaching experience. He is an active member of the National Association for Music Education, the College Band Directors National Association, and the American String Teachers Association. Dr. Edelman is a member of the Phi Kappa Phi honor society and was the recipient of the Muriel McBrien Kauffman Excellence in Graduate Teaching Award (2016) recognizing work during his
fellowship.

Maine native Scott Burditt, has been a public and private school music teacher for more than 35 years, working with students from grade 3 through college. Principal Horn and Personnel Manager for the Bangor Symphony, he is also Librarian and Assistant Conductor of the Bangor Band.

As a professional horn player, he has played with most of the performing groups in Maine, including the Portland and Bangor Symphonies, college orchestras, brass and woodwind quintets and community bands.